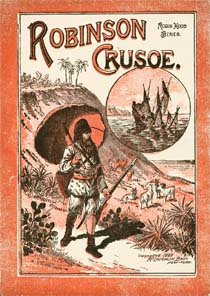 Robinson Crusoe is a young English man with a thirst for adventure and so against his parent’s wishes sets sail on a voyage around the world. However, it seems that the winds of fait are not on his side as his first trip ends in shipwreck, his second ends in capture by pirates and his final voyage leaves him stranded on a desert island.

What follows is years of hardship and turmoil as Crusoe has to provide food for himself, build shelter and avoid capture by the islands native cannibalistic tribe. Not knowing what island he is on and no sign of any other passing ships God only knows if he will ever be saved.

Published in 1719 Robinson Crusoe is the oldest book on the 1001 list that I have read so far, and because of this I expected it to be quite hard going, but with the continuous adventure and fast pace of the story it is actually fairly easy.

However, what I found most enjoyable about Robinson Crusoe

was not the adventure and excitement but more the sheer industrious nature of Crusoe in this horrendous predicament. Over the course of many years on this island Crusoe is able to not just build a shelter and harvest fruits but is also able to capture animals and farm them, grow barley and rice and even make pottery.

I think what makes this so entertaining is that Crusoe survives for years on his own and build a life for himself in this hardship whereas I would probably die as soon as my iPhone did.

It is one of the original adventure tales and a book that has inspired hundreds more and is well worth of its place on the list of 1001 books to read before you die.