The Hitchhiker’s Guide to the Galaxy – Douglas Adams 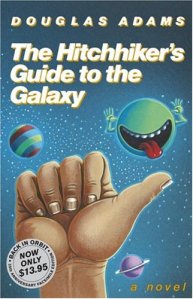 Title: The Hitchhiker’s Guide to the Galaxy

It’s Thursday lunch time and Arthur Dent’s house has just been demolished, the world is about to follow and his best friend has just told him he is an alien. Before he knows it Arthur is hurtling through space, with no home to go back to and no way to get a decent cup of tea. However, things could be worse; at least they have The Hitchhiker’s Guide to the Galaxy and a towel, the most useful item in the universe.

Along their journey the pair encounters the two headed, 3 armed president of the galaxy, a manically depressed robot and a host of other completely zany and bewildering characters and situations.

The Hitchhiker’s Guide to the Galaxy is one of the most original, funny and downright whacky books I have ever read. The implausible ideas that Adams comes up with can only really be compared to the mad ramblings in Alice’s Adventures in Wonderland, but in space and with aliens.

It is quite a short book and very quick to read, barely taking a breath from one chapter to the next, and although it doesn’t always make a great deal of sense, the story is fantastic, the characters are all instantly likable and it really does have you laughing out loud.

This is not a traditional Sci-Fi novel but it is one of the best I have read, injecting a whimsical playfulness into the story that is so often avoided in Sci-Fi. In fact I think what is most enjoyable about The Hitchhiker’s Guide to the Galaxy

is the fact that it takes Sci-Fi and just has some fun with it, rather than being completely logical, precise and serious.

It’s easy to read, a lot of fun and, in my opinion, well deserving of its place on the list of 1001 Books to Read Before you Die.