Tag Archives: The Day of the Triffids 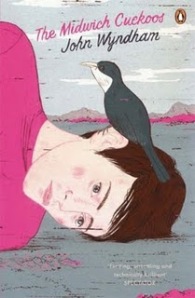 You may not have heard of The Midwich Cuckoos

but I’m sure you will know the story. Turned into the film “Village of the Damned” in 1960 and again in 1995 the story is one of the original cult classic sci-fi tales of aliens within our midst.

One day a strange object appears in the sleepy English village of Midwich and all the locals suddenly fall unconscious. A day later the object has gone, everyone wakes up and everything seems perfectly normal, as if nothing ever happened. However, it is soon discovered that every woman in the village is pregnant.

The resulting Children do not belong to their host parents, they are all blonde, golden eyed, grow incredibly quickly and have strange abilities that give them control the people of Midwich.

Having been parodied endlessly, I thought it would be quite hard to take the Midwich Cuckoos completely seriously, but Wyndham’s very academic, clinical and chilling writing style makes the story quite harrowing.

The only shame with this book is that it is a bit of a slow burner. Split into 2 parts, the first half is a very steady build up, with the Dayout and the pregnancies quite drawn out. However, once into part 2 the Midwich Cuckoos picks up pace and becomes incredibly enthralling as the tension between the Children and the villagers builds.

The end of the book is slightly predictable, but very apt and still highly entertaining. I will confess I preferred Wyndham’s The Day of the Triffids, which is also on the list of 1001 Books to Read Before You Die, but the Midwich Cuckoos is most definitely worth a read for any sci-fi fan.

You can now find us at www.the-book-reviewer.com

Tagged as 1001 Books, 1001 Books to Read Before You Die, John Wyndham, The Day of the Triffids